Mercedes to move into iconic Boeing plant in Long Beach

LONG BEACH - Seven years after Boeing Co. shuttered its 717 plant, a luxury automaker will take over the former commercial aircraft manufacturing facility in East Long Beach.
Mercedes-Benz USA has leased nearly 1.1 million square feet at the former Boeing 717 plant at 4501 East Conant St. in a long-term contract with landlord SARES-REGIS Group and Institutional Partner, according to CBRE, a commercial real estate firm.
CBRE's John Schumacher and Brian DeRevere represented the landlord in the transaction and announced the news Monday.
"This is the largest infill industrial lease in the Los Angeles area in more than 25 years - to be able to replicate this kind of opportunity would be virtually impossible," Schumacher said in a statement.
"There simply is no way to aggregate a +/- 50-acre site within the infill area of Los Angeles, let alone in such close proximity to the port of Long Beach. It's unlikely that we'll see another opportunity for a contiguous parcel with these kinds of improvements within a 20-mile radius of the ports in the foreseeable future."
Closed in 2006 after commercial aircraft manufacturing ceased there, the 717 site attracted various businesses, including a movie studio that never materialized and Tesla Motors, who considered it a home for manufacturing its Model S sedans in 2010.
No word yet on what will be done with the iconic neon "Fly DC Jets" sign still on its rooftop.

SARES-REGIS Group and an Institutional Partner acquired in several phases the building across the street from the 260-acre mixed-use development known as Pacific Pointe at Douglas Park, including a 52-acre 717 site at Lakewood Boulevard and Conant Street across from the airport.
The development includes plans for a future 26-acre retail project, a 50-acre office development and +/- 750,000 square feet of high-end industrial development, according to CBRE.
(Press Telegram - Karen Robes Meeks)
Posted by Stephen Tornblom at 6:39 PM 15 comments:

Posted by Stephen Tornblom at 11:05 AM 3 comments:

LONG BEACH -- Laurence Stevens was a 19-year-old B-17 tail gunner, dozing off above Brux, Czechoslovakia, in 1944 when a jolt snapped him alert.

Dozens of white parachute canopies were blossoming in the freezing stratosphere as B-17s began plummeting toward the ground.

Above him, combat box formations of B-17 "Flying Fortresses" - named for their bristling defensive .50-caliber machine guns - were being swarmed by Luftwaffe fighters.

"When I pressed my face against the Plexiglas I saw German planes swirling around the higher groups," said Stevens, now 88. "It looked like a beehive of activity. "

An enemy fighter, belching smoke and flames, dropped past Stevens' crew position close enough to see the pilot before the aircraft continued a long descent into the earth.

Though those desperate times belong to a passing generation, Southern California residents can get a visceral connection to the airmen of the Eighth Air Force on Saturday at the Long Beach Daugherty Field Airport by touring or even flying in the Liberty Foundation's B-17 "Memphis Belle," used in the 1990 movie with the same name.

The bomber is making its first West Coast tour in honor of the 70th anniversary of its namesake plane's crew completing their 25th and final mission in May 1943.

Stevens, a Temple City resident and 35-mission veteran, stepped back into his past on Monday when he climbed back on board for a B-17 flight. Until another flight earlier this year, Stevens had not been on a B-17 since the war.

Conditions were definitely different for this flight compared to then.
Instead of cruising above 25,000 feet in temperatures around 50 degrees below zero for as many as 11 hours, Stevens' flight was only a leg around Long Beach its port. The temperature was a milk-warm 70 degrees.

The venerable B-17 carried its passengers - sightseers and one former airman - with gusto, leaping off the Daugherty Field runway, the droning engines breaking into a teeth-rattling, penetrating roar as the pilots throttled up for takeoff.

After 30 minutes, Stevens was backing carefully out of a door behind the B-17's waist gunner position.

"Not as easy as I used to do that," he said with a chuckle.

He said the rarity of the workhorse bomber of the battle against Nazi Germany, along with the reality of operating costs that reach $1,400 for fuel alone, makes it more important than ever for people to come out and support the memory of the men who helped liberate Europe almost 70 years ago.

"We tell everyone the history of what they did," Fowler said. "The only way we survive is off donations and the goodwill of the public so we can see this aircraft fly and not parked as a museum piece."

Harrah's Casino in Laughlin, NV has decided to go with Frontier Airlines to run
their charter flights instead of Allegiant Airlines. A couple of reasons for this is:
1. Frontier could do it at a lower cost than Allegiant
2. Frontier will use the 99 seat Embraer E-190 which has less seats
and is cheaper to operate than Allegiants 150 seat MD-80's.
Below is a photo of N176HQ (c/n 19000461) getting
ready to depart to Laughlin in January. 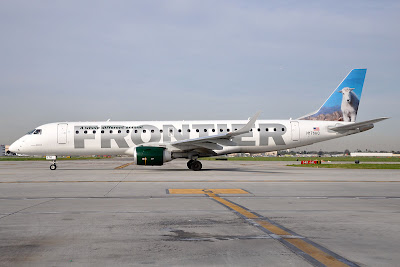 I just wanted to wish everyone Happy Holidays.
Posted by Stephen Tornblom at 10:14 PM 3 comments:

Today the new Long Beach Airport terminal finally opened after what seems to have been an eternity! The airport handed out t-shirts to the customers who boarded the first departure of the day and also to the first arriving customers of the day. JetBlue had cupcakes for customers in their side of the terminal and also handed out 20,000 True Blue points to the very first arriving JetBlue customer who came through the gate on Las Vegas flight 279 and he was excited about receiving the points as seen in a photo below. Below are some photos from this morning.
(Photos by Stephen Tornblom) 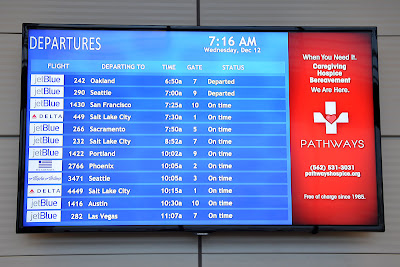 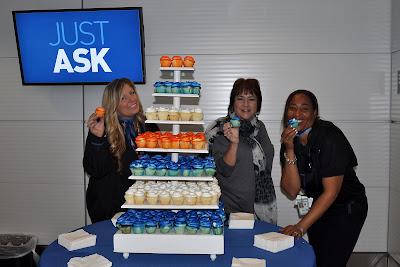 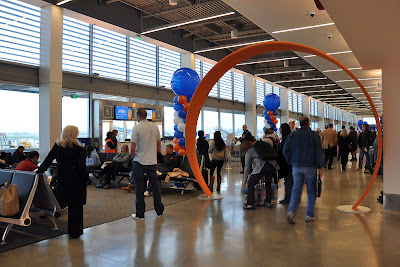 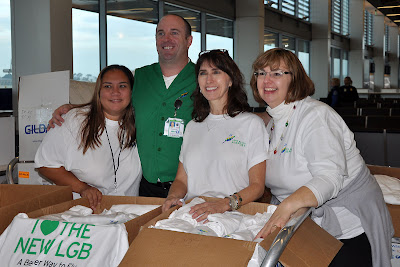 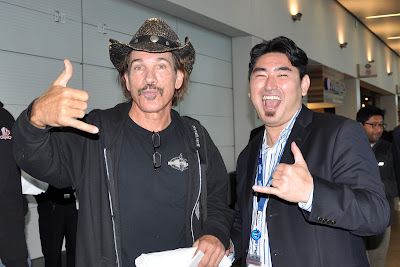 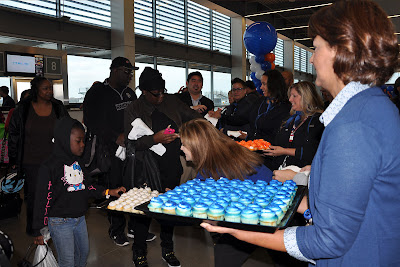 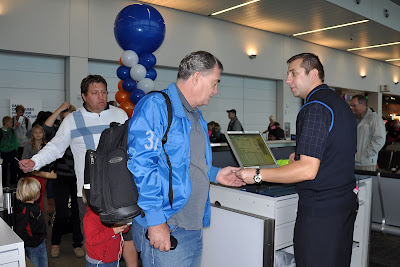 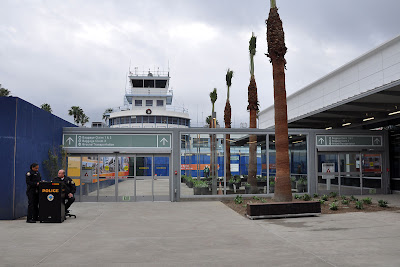 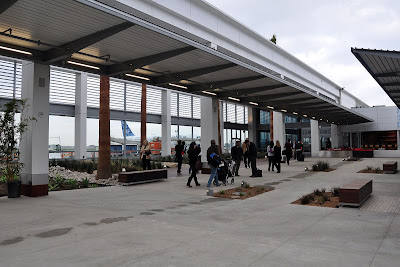 Posted by Stephen Tornblom at 7:18 PM No comments:

The Long Beach Airport held the ribbon cutting ceremony last night for the new terminal which is scheduled to open on 12-12-12 next week. Below are some photos from the even. 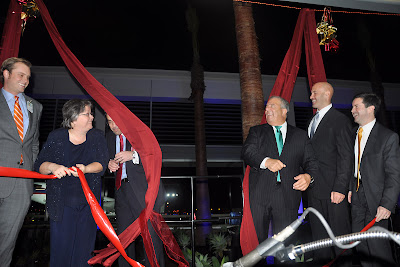 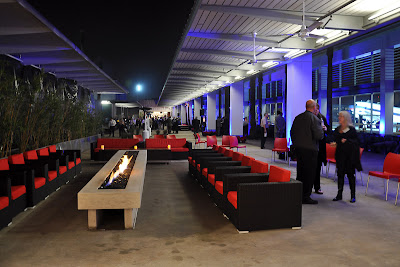 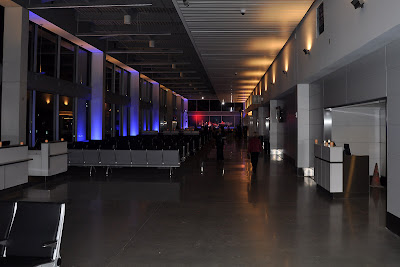 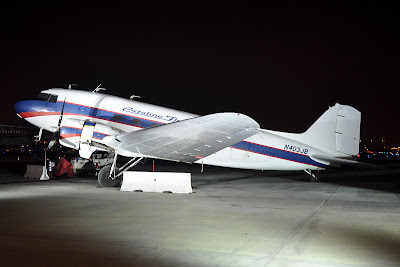 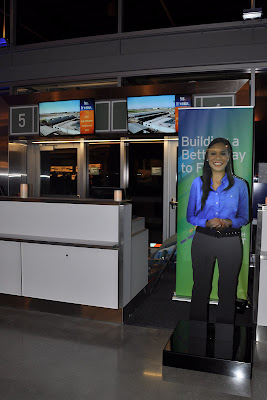 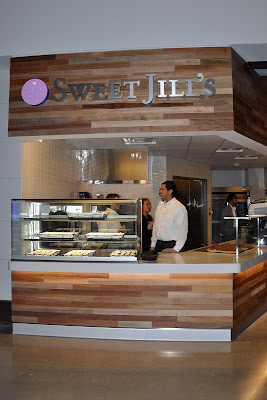 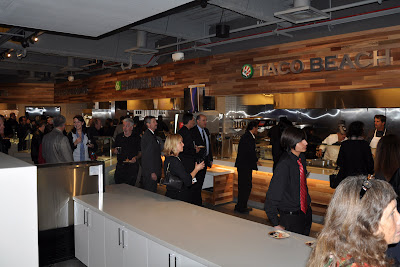 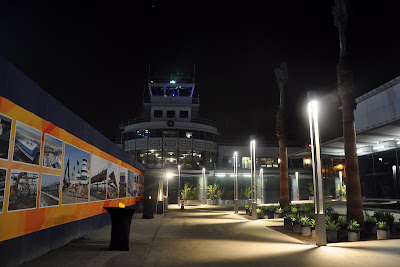 Posted by Stephen Tornblom at 12:33 PM No comments:

The arrival of the B-1B Lancer previously scheduled at Long Beach Airport (LGB) for today, Friday, November 30, has been cancelled.
Posted by Stephen Tornblom at 3:10 PM No comments:

How the Historic Mosaics Were Restored at the LB Airport

In 2009, while writing my second book on Long Beach history, I came across the fact that buried underneath the carpet at the LB Airport were a series of floor mosaics that were designed as part of the Southern California Art Project of the Works Project Administration (WPA) under the supervision of Grace Clements (1905-1969). She was designated "official supervisor of decorations of the Administration buildings at Daughterty Field."

Some of the mosaics were visible on the staircase and the restaurant but the remainder had been covered over by carpet. Unfortunately, the wall murals that accompanied the floor designs were painted over in 2005 and could not be recovered.

When Long Beach hired a new Director of the Lon g Beach Airport, I met with him and shared what I had discovered and encouraged him to have the carpet removed to see if the mosaics could be recovered.

Mario Rodriguez was very enthusiastic and when improvements were planned for the terminal, he included the removal of the carpet to see if the mosaics could be saved. And they have been.Just this month the restoration project was completed and mosaics are available for viewing.

The mosaics cover the 4,300 square foot first floor of the airport when installed by Clements and her workers. A 1942 article in the California Arts and Architecture magazine describes how Clements focused upon the theme of communication: "A large map of the western hemisphere showing air routes occupies the central portion of the concourse floor. Large geometric areas of unbroken color form the main body of the floor, highlighted by design units evolved from the idea of communication -- ships, oil, aviation and the telephone.

Clements also painted four murals on the first floor level dealing with a "particular means of communications -- by land, by water, by air and by sound."

Posted by Stephen Tornblom at 8:29 AM No comments:

LGB's Mario Rodriguez on of 10 most important Long Beach leaders

When Mario Rodriguez took charge of Long Beach Airport operations in early 2009, the historic regional flying field was a functional landmark full of history but lacking in vision. Since then, he has launched a nationwide branding campaign to put Long Beach’s airport on the map while overseeing the implementation of a $140 million modernization plan, the crown jewel of which—a state-of-the-art concourse—will be opening ahead of schedule this December.

Instead of shrinking down an LAX-type airport model for the future LGB, Rodriguez’s plans called for the restoration of the airport’s historic art deco terminal—including the recently discovered mosaic floors hidden for decades under dingy carpet near the check-in desks—as well as a series of expansion projects that will soon posit the facility at the forefront of air travel.

In the last year, Rodriguez saw three consecutive quarters in which LGB not only had the cheapest airfares in the state, but the second-cheapest in the entire nation. All as the airport prepares to open a partially solar-powered 14,200 sq. ft. concourse that will generate more than a hundred new jobs and house Long Beach-only businesses.

By simultaneously respecting the past and crafting a vision for the future, Rodriguez’s power to give LGB a vision has made Long Beach’s once-overlooked local airport into a regional air travel gateway, one that will continue to be an economic force for the City without being detrimental towards the aura of what makes Long Beach Long Beach.

Posted by Stephen Tornblom at 8:25 AM 3 comments: