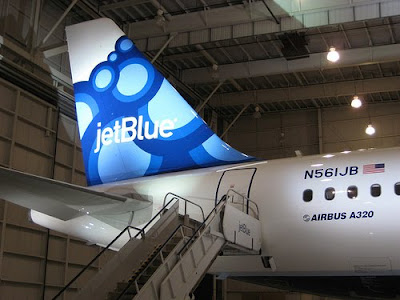 Last night in front of over 500 crewmembers in Orlando, JetBlue introduced the newest tail scheme called "Blueberries" on aircraft N561JB (c/n 1927). The company also made the name JetBlue larger along the windows forward of the wing which is now all blue instead of the silver and blue like the old titles. On the engine, www.jetblue.com is gone replaced with just jetblue.com in a larger font which is easier to see.
Here is a link to a photo taken of the plane after the event was done: http://www.airliners.net/photo/JetBlue-Airways/Airbus-A320-232/1593936/L/
Here is a link showing how the current titles and engine logo look:
http://www.jetphotos.net/viewphoto.php?id=6087703
At the same time, the company has decided to retire the "Plaid" tail scheme which is worn on aircraft N585JB to N603JB. The company said the following to employees: "Plaid’s design is perfectly in keeping with our brand, but here’s the problem – painting the darn thing on our tails is too cumbersome! It takes more paint to do a Plaid tailfin than Stripes, for example, and it takes longer to complete a Plaid design. Also – with that much more paint being used, it adds weight to the tail, which affects fuel efficiency." Looks like maybe the new tail scheme will be placed on those aircraft as well as those numbered N561JB to N584JB.
Posted by Stephen Tornblom at 10:36 AM

Email ThisBlogThis!Share to TwitterShare to FacebookShare to Pinterest
Labels: JetBlue

Stephen, I have to agree with many others on the blogs that this was a tremendous letdown.

The news buzz made it seem like it was something new and bold.

As former LGB JB ground ops I like it, its a nice update. It looks good. The larger logo looks really nice. "jetBlue on the ground!"